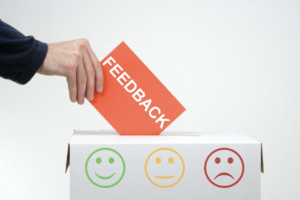 Last week, I wrote about the challenges of managing vague creative feedback, and provided a couple of thoughts on how to bring such situations to resolution. The good news? That post was based on writing feedback on a real-life freelance project, and the next step went smoothly. Woohoo!

How did I move the client from uncertainty to approval? Pretty simple, really. But you need a little more backstory than I provided last time.

The text I provided had been through two rounds of revisions without major rewrites. In fact, the content had been approved for uploading and design. The problem came when the client saw it live on the beta-test page, the design of which had also been approved.

From the client’s comments, I interpreted that it wasn’t 100% about the writing, which had technically been given a thumbs up. It had to do with how the beta-test page looked. The text seemed long and blocky, without enough variety. (I had cautioned about this during the draft stage, but the client was insistent on including everything.) In the meantime, the designer needed to take a different tack, too. Since the first layout was a no-go, he secured approval on a different website template that the client liked.

My solution was to provide the next writing draft in a rough layout, using the word counts from the new template. That enabled me to provide the client with some visual cues.

In other words, essentially the same content, but a different presentation.

It’s Not Always about the Words: Visuals Matter

Here’s the takeaway: I took the comment “I’ll know it when I see it” very literally!

Although we as creative freelancers pride ourselves on being able to visualize what text is going to look like based on cues such as [head], [subhead], [callout], [photo caption], etc., not all clients have that skill set. Anything you can do to help them make the connection is going to make life easier for you. In this case, creating a visual reference provided the leverage I needed.

I must add a caveat here. In my magazine days, it was frowned upon to give unapproved copy to the art department. (Actually, you might get stabbed with an X-Acto knife—graphic designers don’t enjoy wasting time on something that might change dramatically.) For that matter, as editors we preferred the control that Word gave us compared to the more-daunting task of executing edits within the design software without screwing up the layout. The later in the process you execute significant edits, the more you’re exposing yourself to errors.

The later in the process you execute significant edits, the more errors can creep in. #amediting

Other Strategies to Consider

A few of the comments made in the previous post can help you address writing feedback that’s unhelpful, vague, or not easily implemented:

In the comments: What are some of the writing feedback tricks you’ve employed to move a stalled freelance project forward?