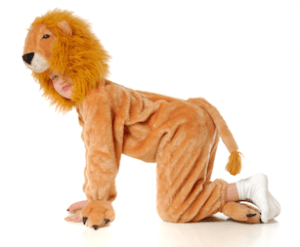 On Halloween night a few years back, a young girl dressed as a lion marched up to my wife on our front patio and said, “My mom says that you shouldn’t have candles in your pumpkin, because my tail is flammable.”

My wife replied, “Well, I guess you’re going to have to watch your own tail.”

This post isn’t about safety around open flames or teaching kids about manners. It is, however, about personal responsibility in freelancing.

There’s No Such Thing as Risk-Free Freelancing

I’ve had my philosophical differences with Freelancers Union over the years, and their new #FreelanceIsntFree campaign strikes me as quixotic. (Disclosure: I am not a member of the organization.) I don’t need to be “empowered” to demand “fair treatment” from my clients. Watching the video at their advocacy page, I can only shake my head in disbelief that freelancers allow themselves to get tens of thousands of dollars in the hole to a client. Talk about not watching your tail while walking right into an open flame.

In principle, sure, you should get paid for the work you do—but that’s your responsibility as a business owner. Freelancing is not a risk-free enterprise. Call me cold-hearted, but I would argue that no one is a victim of nonpayment or working for free—and that calling nonpayment wage theft is a deceptive use of language when discussing independent contractors. You’re not a wage employee, and should not expect to be treated as such. Running your own business requires an extra measure of vigilance.

There’s no such thing as risk-free #freelancing

I say all this as a freelancer who’s been burned a few times over the years by nonpayers. Were the clients unscrupulous? Yes. Can I point to weaknesses in my own processes in every single case? Absolutely. And guess what, I fixed the processes so it wouldn’t happen again.

Most important, I believe that the mindset of a hashtag initiative such as #FreelanceIsntFree positions us in an adversarial relationship with our clients and potential clients. If it were focused on educating freelancers how to protect themselves, that would be one thing—but instead, it seems to be more about kvetching that evil clients have dangerous candles in their pumpkins, and lobbying government to Do Something. Which brings me to…

No One Can Build Your Safety Net But You

On Facebook, a number of my colleagues noted that the union’s new “Freelancing in America 2015 Report” was conducted in partnership with Upwork (formerly Elance-oDesk). That’s right: a freelance bidding site that is notorious for driving down freelance rates! Discussing the survey results in “This Is What the State of Freelancing in the U.S. Means for the Future of Work,” Freelancers Union founder Sara Horowitz pleads the case that freelancers face enormous challenges and that we have no “reasonable safety net.”

They don’t have access to unemployment insurance, so during fallow periods they usually have to cannibalize their own savings. They can’t take advantage of tax withholding, employer-sponsored health care, or retirement savings programs.

I couldn’t disagree more. If you run your freelance enterprise like a real business, you most certainly have constructed a safety net. That’s the tradeoff: In exchange for the freedom and flexibility of being self-employed, you are responsible for the so-called benefits package that you’d get from corporate employment.

No one can build your #freelance safety net but you

Stuff happens. Sometimes awful stuff. Don’t misunderstand what I’ve written here: I have empathy for the people who have genuinely gotten screwed by unethical clients. No one should expect to be entitled to a risk-free freelance enterprise, however, and there is no way to legislate away or adjudicate every single bad thing that occurs.

Call me cynical (you won’t be the first), but I believe this type of mentality actually holds freelancers back: Thinking that there’s some sort of hashtag that’ll make all the bad clients go away, start behaving ethically, or pay in less than 30 days. Thinking that setting a minimum hourly or project price will protect you from lowball clients. Thinking a union or the government will enforce The Rules to protect you, without any unintended consequences.

Nope, if you’re looking for treats and want to avoid the tricks, you need to watch your own tail.