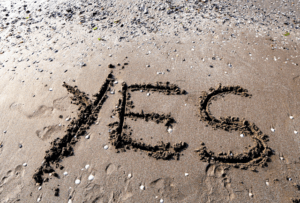 A Google search of “saying no to freelance jobs” currently coughs up 9.2 million hits, while “saying yes to freelance jobs” clocks in at half that—and a quick look shows that most of the latter results are really about saying no. I don’t disagree that it’s important to turn down work that waves a red flag in your face. At the same time, that’s not the philosophy I take into the business arena. As Tom Robbins noted in Still Life with Woodpecker, “There are only two mantras…yum and yuk. Mine is yum.”

Why start from “yes”?

#Freelance philosophy via #TomRobbins: “There are only two mantras…yum and yuk. Mine is yum.”

There are plenty of great articles about saying no to freelance jobs out there, and I’ll leave it to you and your Google-fu skills to find them. Again, this isn’t about letting down your defenses and saying yes to everything, but being open to possibilities to grow yourself and your business. Even “yes, but…” is a stronger position than a reflexive no. The universe might just surprise you.

Two quick announcements before I get back to the grindstone…

I’m pleased to announce I’ll be speaking at Startup Week PHX in downtown Phoenix on Monday, February 19, 6-7 p.m. local time. (Event details here.) My presentation will include tricks and tips for finding talented writers, designers, and other creatives; how to vet prospective freelancers; and best practices for cultivating better relationships. Although my session is aimed at helping people hiring independent creatives, I imagine the overall event will be a networking opportunity for local freelancers.

I’m also doing mentoring sessions at 2 p.m. and 2:30 p.m., and will be available before or after to talk shop. So stop by to say hi!

If you’re interested in improving the financial side of your freelance business, please join me for my Editorial Freelancers Association webinar, “The Pricing (and Estimating) Is Right!” on Wednesday, February 14, 1-2 p.m. (Eastern). I’ll address the critical steps of formulating your price structure and presenting your estimates in the most persuasive manner possible—and getting a better read on whether you should be saying yes or no to freelance jobs—and there’s a Q&A if you’ve got pricing issues you want to discuss.

That’s it for now. Don’t forget to say “yum” once in a while!